Mayor Ballard’s response to crime in Indianapolis deliberately avoided a demand for a ban on the AK-47, the gun that killed Officer Perry Renn.


This murder weapon was purchased legally from Don’s Guns by the shooter’s mother. Ballard, Governor Pence, and city and state legislators should pledge to rid Indiana of this weapon that was, at one time, illegal.


I propose the following:


1.       Call upon all Indiana politicians to wear “Ban The AK-47” T-shirts* in memory and in honor of Officer Renn and the other victims of assaults with this violent weapon.

2.       Join other Hoosiers, including NRA members, in wearing these T-shirts as a sign of support for our police officers. (The disconnect between members and the leadership of the NRA on such issues as the AK-47 has often been reported.)

3.       Encourage the media to step up, asking our political leaders about such a ban. And keep asking.

4.       Hold a funeral for the AK-47, once it is banned. I am confident that the police officers who attended Officer Renn’s funeral would be there, since they are those most at risk from this terrible weapon.

Let Ballard, Pence, and the legislators begin the push for the AK-47’s death in Indiana. I’m sick of living in a city and state run by cowards. 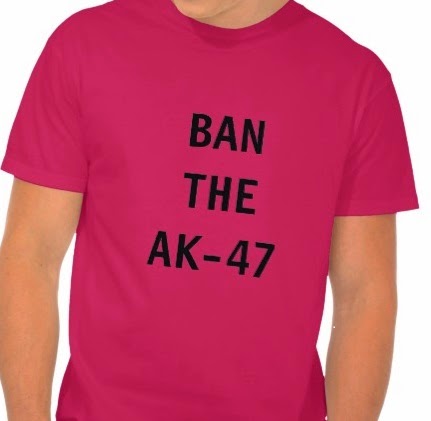 Posted by John Sherman at 11:43 AM No comments:

John Sherman
John Sherman has extensive first-hand knowledge of foreign affairs, having lived and worked in Nigeria/Biafra, Ghana, Malawi, and Zaire (now the Democratic Republic of the Congo). He spent a summer as an exchange student in Germany. Sherman has also lived in Washington, DC, in Santa Fe, NM, and in Indianapolis. He grew up on a farm in Indiana. He has traveled extensively throughout Africa and Europe and participated in conferences in Europe, Africa, and Asia. He is the author of nine books, an opera ("Biafra," based partly on his experiences in the Nigerian Civil War), and has published poetry, fiction, and essays on African affairs and other subjects, in many newspapers and journals. He received a BA in Journalism and English from Indiana University and did graduate work in African Studies (Literature) at the University of Ghana. He has received numerous awards for his writing. He gives frequent readings of his work and lectures on a variety of topics. He has been a teacher at the secondary and college levels in the U.S. and Africa, as well as a newspaper feature writer and columnist and editor of two magazines. He has owned his own business for more than 20 years.